Tom Cutinella's bedroom hasn't changed since he died – trophies and mementos still remain as a reminder of a young life well lived. His No. 54 jersey captures the sun in the windows, and reminds Kelli and Frank Cutinella of their lost son.

"Sometimes I think, 'Wow, five years,' and I think everything that has happened in five years that Tom was not a part of," says Kelli Cutinella.

Video: Reflecting on Tom's life, a community comes together

Five years ago, Cutinella collapsed on the field during a Shoreham-Wading River game after colliding with an opponent.  He later passed away.

They family still celebrates Tom's birthdays – he would have been 21 this year.

Sometimes I think, 'Wow, five years,' and I think everything that has happened in five years that Tom was not a part of.

At Phil's Restaurant in the heart of Wading River is the Wildcats Hall of Fame. Every Shoreham-Wading River championship team has its own pictures. Tom has one too, right inside the main entrance. 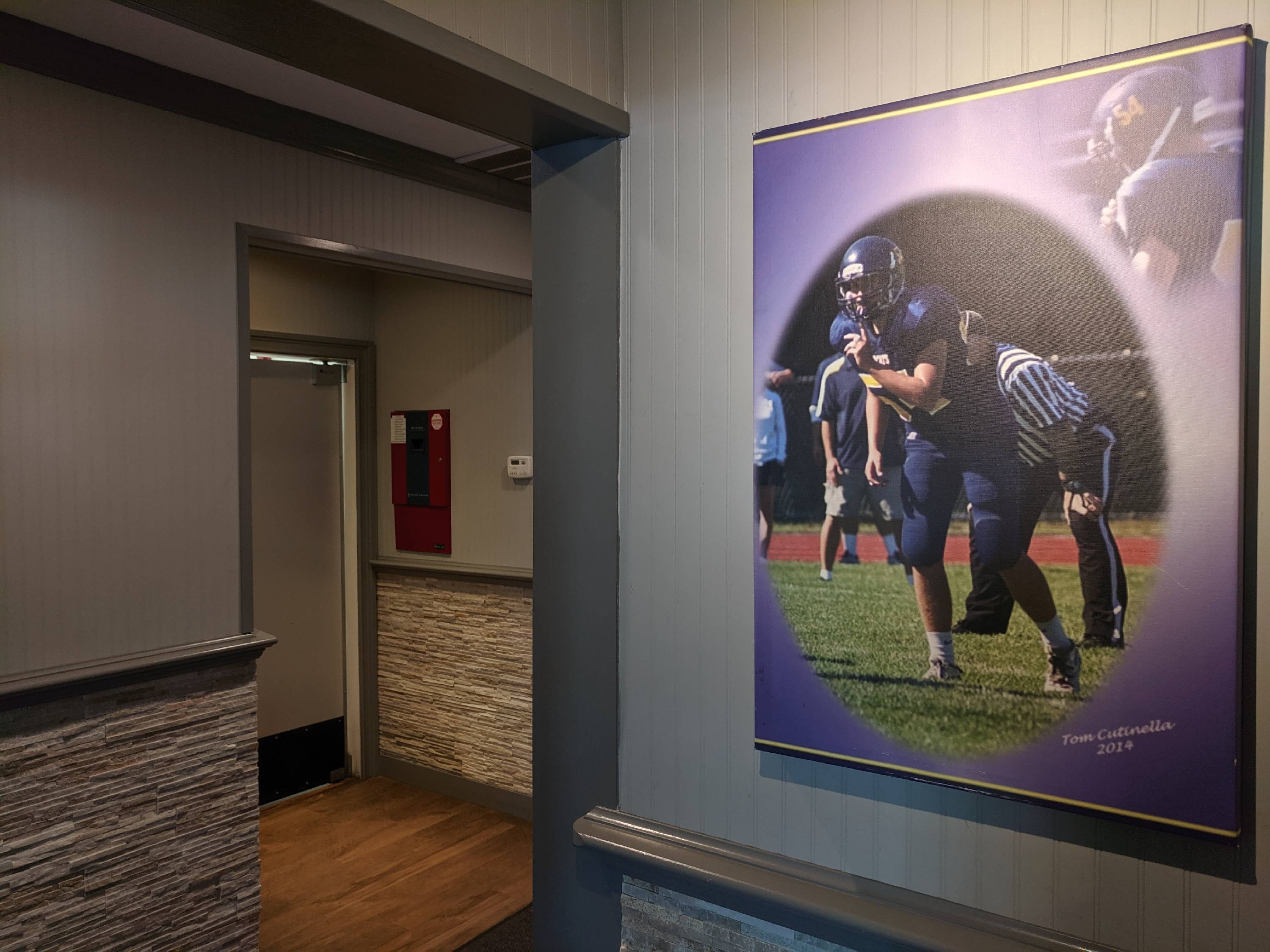 A photo of Tom Cutinella graces the entrance of Phil's restaurant (Dave Dodds/News 12)
Adam Benali knows the Cutinella family well – he has been their barber for years. He watched Tom grow into a young man.

Three years ago, after nine years working in the shop, Benali had an idea that was sparked by Tom.

"My wife, I told her, maybe I'll buy the barber shop," says Benali. "She says, you pick the name. I said, yeah I got the name."

And so, with the Cutinella family's blessing, Barbershop 54 was born, and Tom's memory has lived on with every cut.

"It's sad we are remembering our son instead of him being here with us to celebrate life," says Kelli Cutinella. "But it's humbling to know the town has been so supportive and sharing him with us as well." 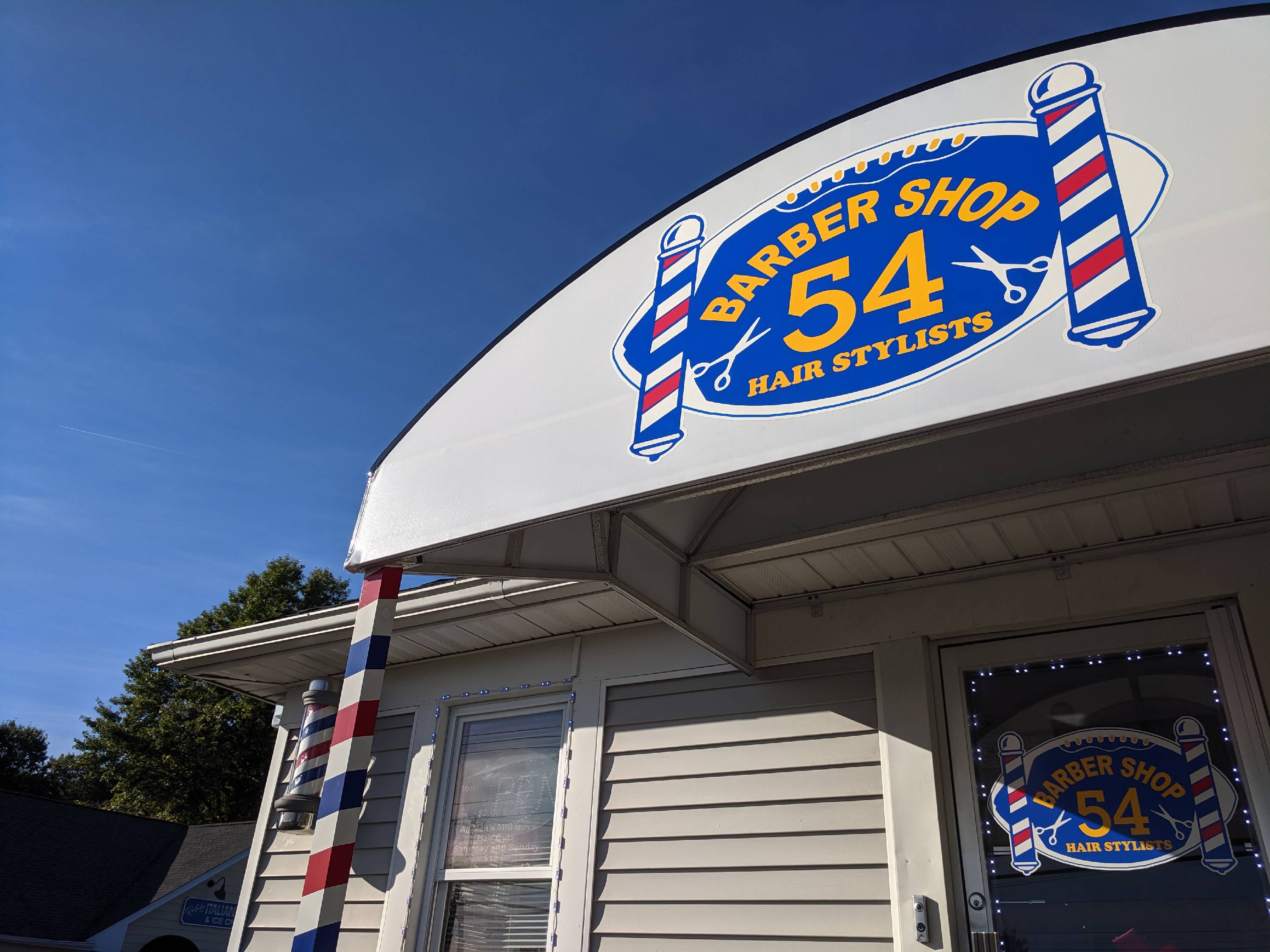 Barbershop 54 honors Tom's memory.  Its name incorporates the number he wore. (Dave Dodds/News12)
But the place where Tom's memory lives on most is at a Wildcats football game night. The monument put up to honor Tom two years after he died is a bit worn, but his message of teamwork and brotherhood lives on.

With Tom in the team's hearts and minds, they have succeeded – winning three championships since his passing. Teammates say Tom has a piece in each one of those wins.

He would be happy. He celebrated life. He did.

It's victories and moments like those bring happiness to Tom's parents. While they wonder where Tom would be if he was still alive, they say they know what he'd be doing.

"He would be happy. He celebrated life. He did." 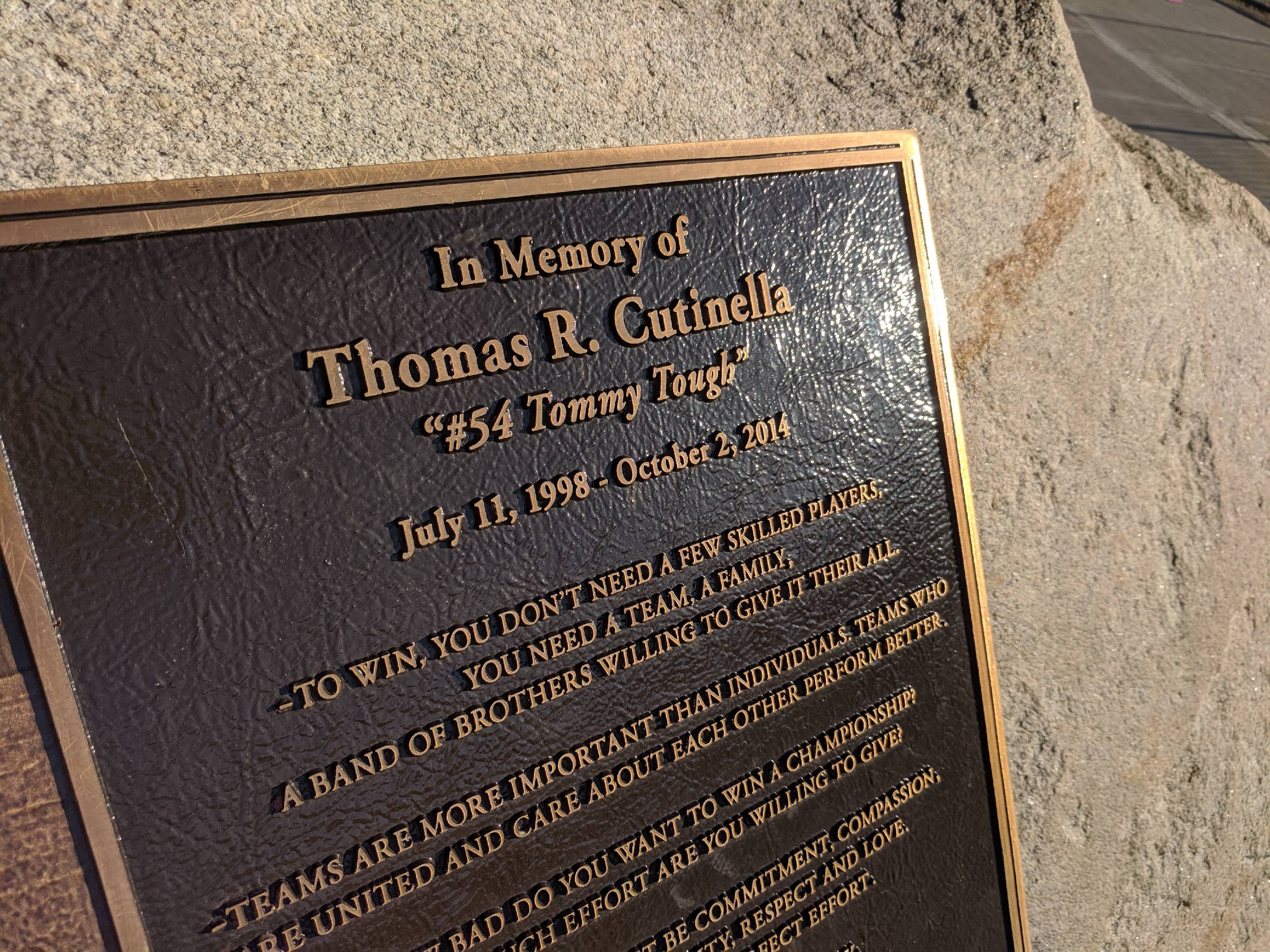 Karen and Cam Crowell are high school sweethearts. When they got married last year, their hearts became one. But Karen’s heart used to belong to Tom Cutinella.

“I think about him every day,” says Karen Crowell.

Cutinella died after getting hit in the head during a Shoreham-Wading River high school football game.

Three months earlier, Cutinella celebrated his birthday by getting his driver's permit. But he also decided on that same day to become an organ donor.

“Tom is a giver. And that's what people talk about. He gave in life and he gave in death,” says Frank Cutinella, Tom’s father.

Karen Crowell was diagnosed with cardiomyopathy – an enlarged heart – in sixth grade. Over time, her heart only got weaker.

Tom is a giver. That's what people talk about. He gave in life and he gave in death.

At 21 years old, just days before graduating college, Karen was hospitalized and was told she likely had less than a year to live. She needed a transplant.

Wayne Smallwood, 56, is a former Babylon High School basketball player. In his late 40s, he developed diabetes, which led to chronic kidney disease, and a spot on the organ donation wait list.

"It was one of those situations where they basically said you're not going to die overnight," says Smallwood. "You just don't have a long, period."

Smallwood was on the wait list for two years. On Oct. 2, 2014, shortly after Tom Cutinella died, Smallwood got a call saying doctors had a kidney and pancreas that would save his life.

They are all an extension of Thomas. That's part of who he is.

"I said, 'Where? How?' She said, 'Well, a young man just died on Long Island in a football accident,'" says Smallwood. "I said, 'Wait a minute, I just saw that on TV. Was that Shoreham-Wading River? She said, 'I'm not allowed to tell you, but that's it.'"

A year after receiving Tom's organs, Karen Crowell and Wayne Smallwood got the chance to meet Tom's family in Wading River.

"They are all an extension of Thomas. That's part of who he is," says Kelli Cutinella, Tom's mother. "For me it's like bringing the family back together again."

Wayne and Karen have become family to the Cutinellas. It's why Karen was at Eisenhower Park last month as the Cutinellas spoke at an organ donor event. And it's why she's tested her and Tom's heart by running the Tunnel to Towers race with Kelli in Tom's memory for the past four years.

It's also why, at Crowell's wedding, Kelli was there with the most important women in Karen's life.

"Kelli is funny, she's like another mom in ways," says Crowell. "Someone I can talk to if I'm having issues or trying to figure things out in my own life. She is in a very organic way, always there for me."

Karen and Wayne have done their best to be there for the Cutinella family, including this summer when they celebrated what would have been Tom's 21st birthday. And it's why Wayne texts the family nearly every week.

And it's why Wayne says when he finally does get to heaven, he says he will thank God first, and then he'll thank Tom Cutinella. 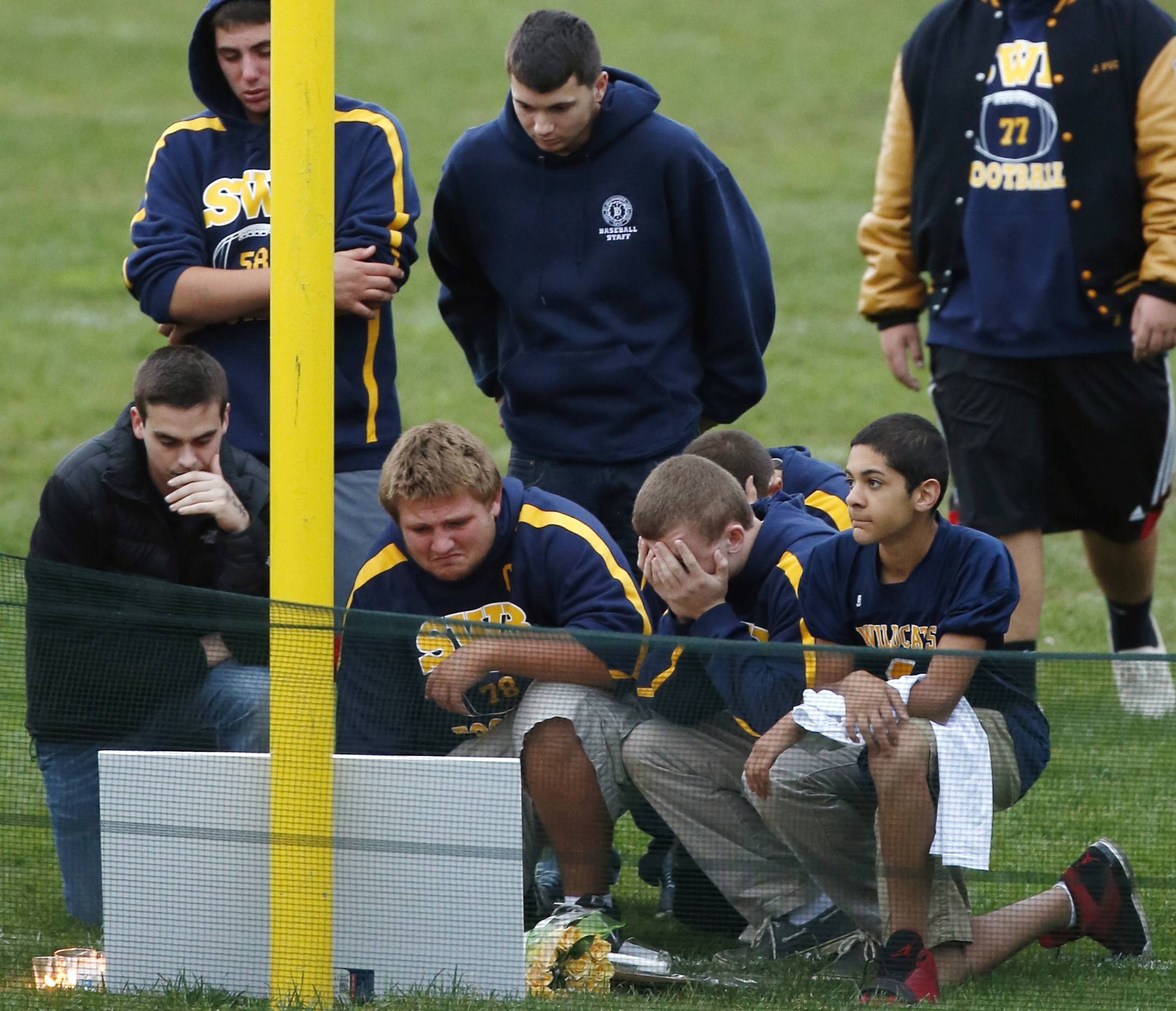 Teammates gather at a makeshift memorial on the football field at Shoreham Wading River High School in 2014 for Tom Cutinella. (AP Photo/Kathy Willens)

Apprehension in the Aftermath

High school football can give kids the thrill of a lifetime, but it can also give parents nightmares.

Five years after Shoreham-Wading River’s Tom Cutinella died due to a hit on the football field, the debate over the future of high school football on Long Island rages on.

“We can’t ignore what I ignored or didn’t know 15 years ago when I signed my son up,” says Frank Cutinella.

Sarah Bogarty says she isn't ignoring the warning signs with her two children, neither of whom will be joining a football team.

We can’t ignore what I ignored or didn’t know 15 years ago when I signed my son up.

“It’s too dangerous. There’s always someone being carted off a field, always,” says Bogarty. “So, to me, that’s just too much.”

LINK: More on this story from Newsday.com

It’s too dangerous. There’s always someone being carted off a field, always.

The drop has hit even harder out east, where for the third year in a row, East Hampton has not been able to field a football team.

But Suffolk’s Section 11 Executive Director Tom Combs says there are many factors contributing to lower numbers. He adds that football is as safe as it can be.

“The helmets are better, there’s more awareness, the kids are being taught at an earlier age how to tackle correctly,” says Combs.

Parents and officials do agree on one thing – proper teaching at the youth level is needed now more than ever. Some say tackling at lower levels should become a thing of the past.

“There should be no tackling in youth football until they’re 11 or 12,” says Combs. “We don’t need 8-year-olds tackling each other.”

Just last month, two junior varsity players in Long Beach were airlifted to a hospital after colliding with teammates. Both ended up OK, but it was a scary reminder of the dangers of football.

“This is Tom's sport, he would want it to be preserved, but I think drastic changes in the game may bring people back -- but I don’t know who's listening anymore,” says Cutinella.