DECADES IN THE MAKING

It's finally happened. The Islanders have a new home on Long Island: UBS Arena at Belmont Park.

Nassau Coliseum had been in deterioriation for decades. While beloved by fans for its sight lines and seat-rumbling atmosphere during big games, nearly everything else was outdated - from the concourse to the amenities, you name it.

The saga to get the Islanders to their new home would hit a number of snags during years of uncertainty.

Development plans, political infighting, ownership changes, a move to Brooklyn, a move back to Nassau - and a global pandemic - here's a look at the twists and turns on the Islanders' road to Belmont.
VIDEO: Isles ready for new UBS Arena after rocky road to Belmont

BREAKING GROUND IN ELMONT
Officials finally broke ground on the new arena in September 2019 following all of the drama and false starts.

"It shows that Nassau County is not the land of 'no,' but we are in the business of building for the future. We can build great things," Nassau County Executive Laura Curran said at the time.
VIDEO: Arena Groundbreaking Ceremony

LEDECKY: A SALUTE TO NEW YORK

Islanders co-owner Jon Ledecky has been a champion of the Belmont project. He calls the flourishes of the new UBS Arena a "salute to New York."

"This was a fanbase in search of a home for two decades, really," Ledecky told News 12. "The sell-by date of the Nassau Coliseum came and went a long time ago. This is an A+ arena."

1-ON-1 INTERVIEW: Islanders owner Jon Ledecky on UBS Arena ahead of opener

This was a fanbase in search of a home for two decades, really.

Ledecky says fans had a huge impact on the look and feel of the arena.

“This is their building. They feel like they built it. That's the best thing an owner in sports can ask for,” says Ledecky. “The major spaces we built here -- the fans said, ‘Jon, don't make it a corporate suit building. We are Islander fans. We want to be able to celebrate together.’”

Ledecky told News 12's Kevin Maher that he was able to incorporate the “best of the best” practices from other teams in the league.

FIRST TIME ON THE ICE

The team got their first chance to take the ice two days before opening during a practice.

"To walk around place for the first time and see what everything's about and see how hard everyone's been working on this place ... it's going to be really great, I'm excited for everyone to get in here," said captain Anders Lee.

VIDEO: The Islanders practice on the UBS arena ice for the first time

"This truly is transformative and this is now the epicenter of fun and cool in Long Island," Hochul said.

"I hope we have delivered to the fans, the greatest fans in the National Hockey League," Ledecky says. "You deserve this home, and you now have it."

"No longer is Long Island the land of no, we are the land of 'Yes! Yes! Yes!'" said Nassau County Executive Laura Curran.
VIDEO: Hochul, Ledecky cut ribbon at UBS Arena 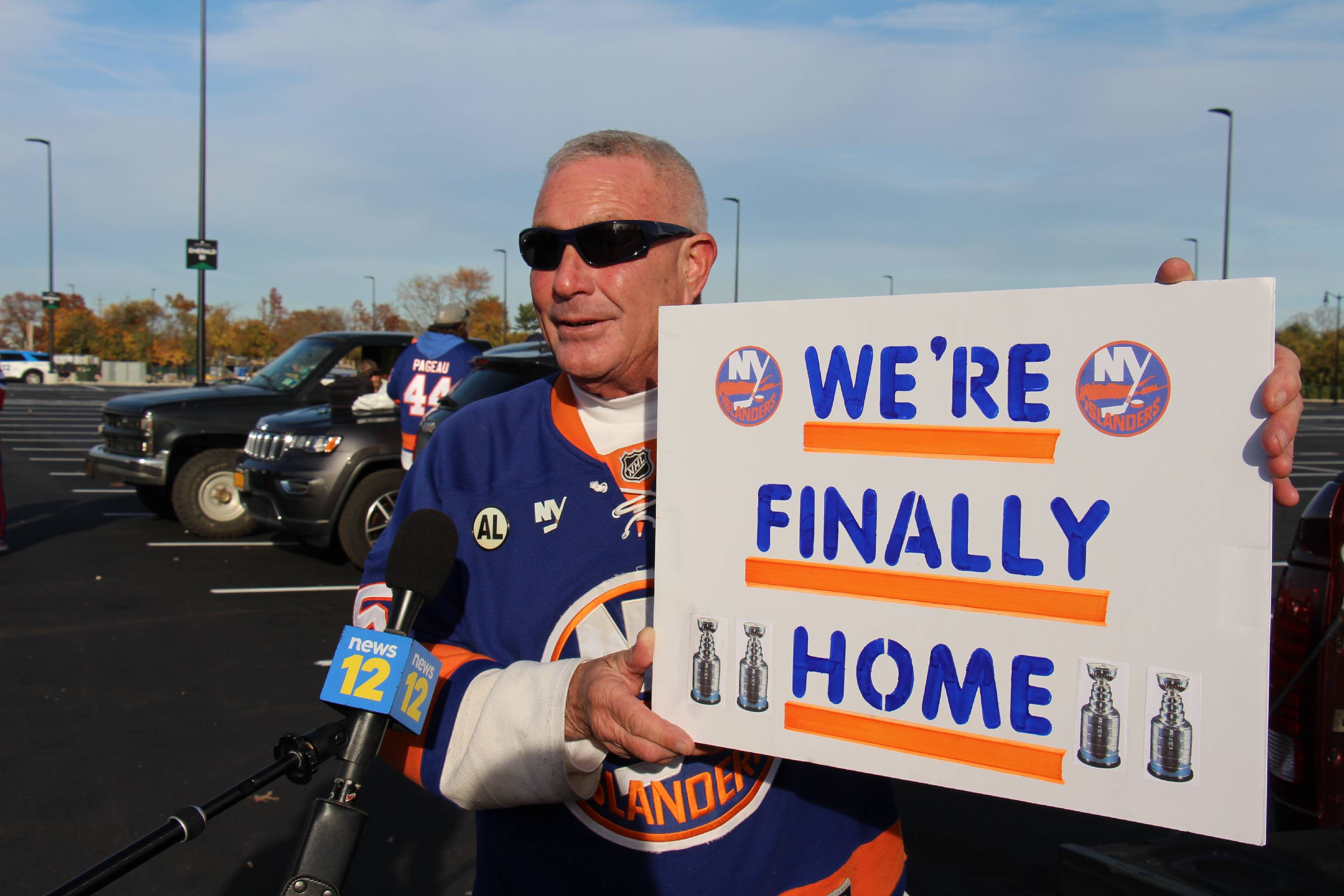 EXCITEMENT IN THE AIR

Though prominently posted signs in the UBS Arena parking lot forbid tailgating and honking, fans were out there hours before gametime to celebrate the grand opening.

“I want to walk around – feel the energy. Feel the excitement. Feel the arena,” said Patrick Dowd, the Islanders “Sign Guy.”

Jason Petty, of Islip, told News 12 the opening of the new arena is a special moment in the team’s history.

“This is it. The cement that we are here to stay, and we mean business,” he said.

VIDEO: Isles Fans Wait to Get in to First UBS Arena Game 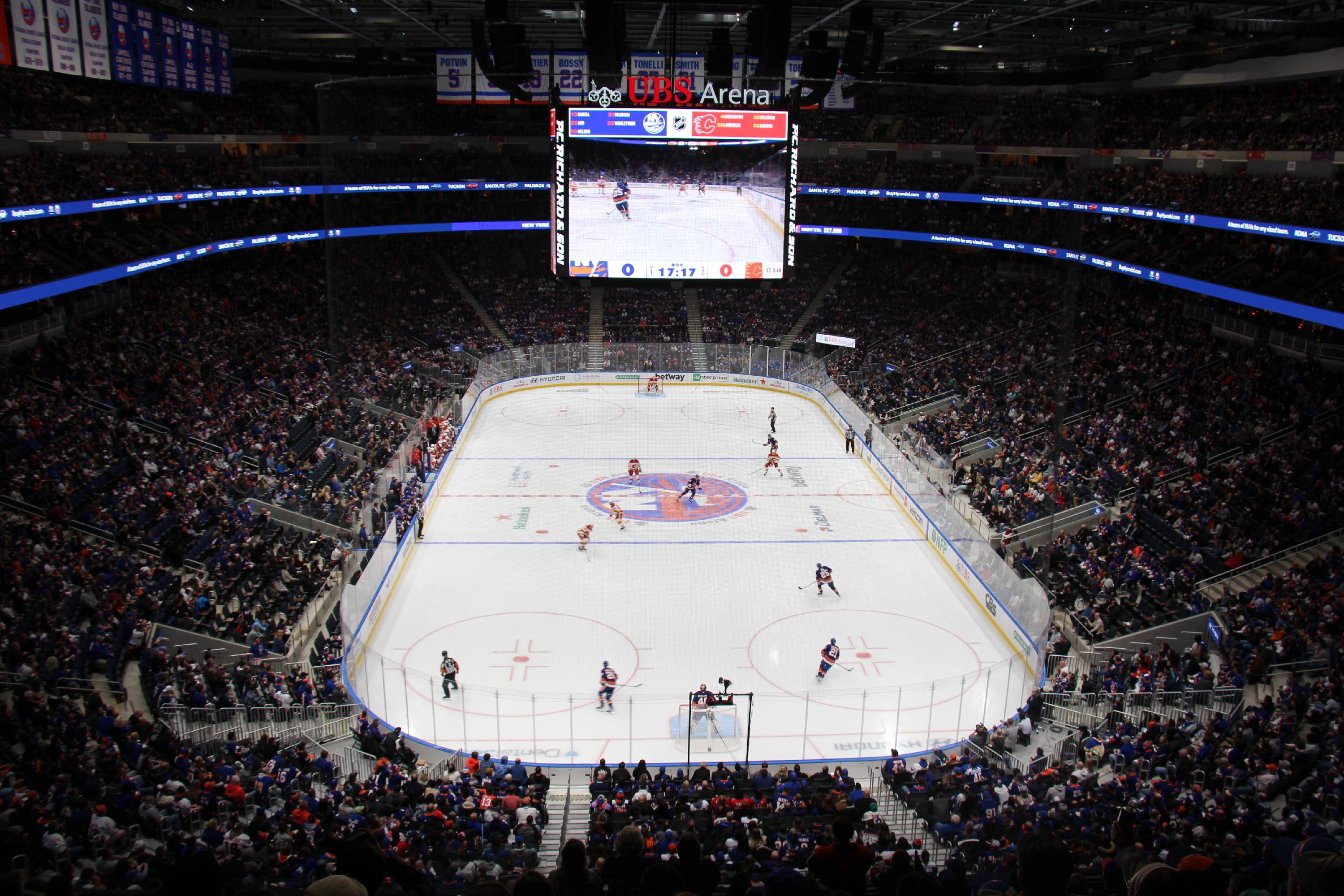 The New York Islanders face the Calgary Flames in the first game at the UBS Arena at Belmont Park. (News 12/Brian Heyman)

Islanders fans filled the arena for opening night - a mixture of excitement, relief and near disbelief the Islanders finally had their new home at Belmont.

"I cannot believe it's real," one fan told News 12 through tears.
“It’s everyone’s first time being here," one fan chuckled asking for directions to the brand-new concourse.

This first game wasn't without hiccups. The Islanders were without six players due to COVID-19 protocol. Islanders captain Anders Lee, longtime Islanders forward Josh Bailey and shutdown defenseman Adam Pelech were among those missing. And the Islanders went down 2-0 before Brock Nelson scored in anticlimactic fashion, as the goal was initially blown off. Play continued until review determined Nelson's goal good. He would score again before the Islanders ultimately fell to the Flames 5-2.

Despite the loss, simply seeing the team make it to UBS Arena was the real victory.
'Let's Go!' UBS Arena Opens to Much Fanfare 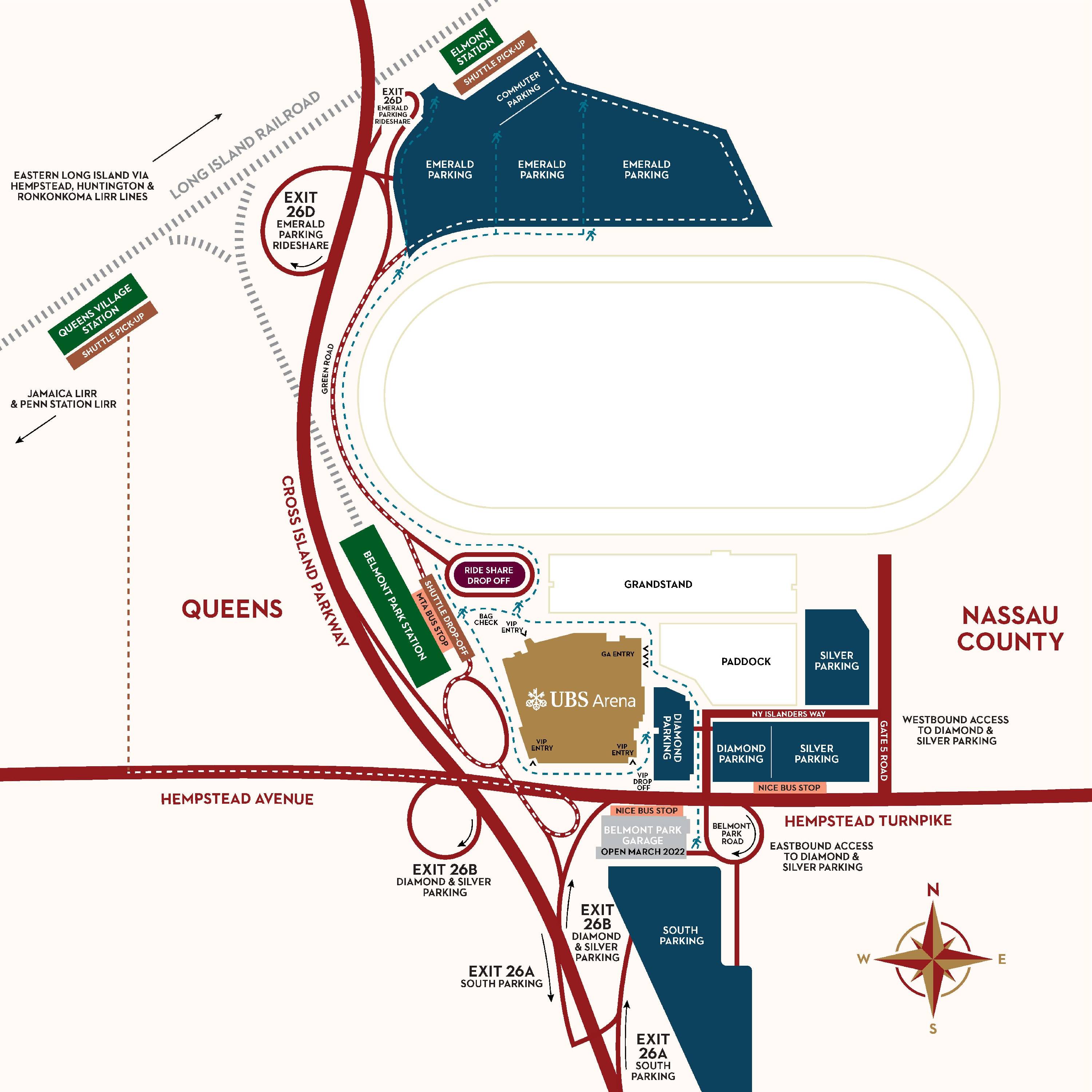 Ready to catch an Islanders game at UBS Arena?

This guide will help you plan your trip on game day, or for concerts and events - whether you're taking the train to the brand-new Long Island Rail Road stop or driving.